Gozzoli, Preaching to the Birds & Blessing of Montefalco

The hill town of Montefalco is tiny (pop. 5,581), but that doesn’t prevent it from having a surfeit of spectacular art. As reported by the Rough Guide to Tuscany & Umbria:

The town was the birthplace of eight saints, good going even by Italian standards. . . . It was destroyed by Frederick II in 1249 . . . . Its chief historical interest lies in a brief interlude in the fourteenth century, when the town became a refuge to Spoleto’s papal governors, left vulnerable by the defection of the popes to Avignon. Their munificent presence results in the rich decoration of local churches . . . . [Rough Guide]

We had time only for the Complesso Museale di San Francesco, and the time we spent wasn’t anywhere close to enough. To give you some idea, in 1893, a writer on fine arts reported: “Long ago the Provincial Deputation of Fine Arts declared, ‘that the Church of San Francesco of Montefalco was superior in the beauty of its frescoes to all the churches of Umbria, except that of San Francesco of Assisi.’” [cite]

The lives of the saints are among many things about which I know next to nothing. In many instances the frescoes and paintings encountered on this trip were the first I knew.

Take, for example, this story about St. Jerome:

At one time of his life, St. Jerome lived in a monastery he had founded at Bethlehem. One day he and some of his monks were sitting to enjoy the cool of the evening at the gate of the monastery when a big lion suddenly appeared walking up to them. The monks were horribly frightened, and scampered off as fast as they could to take refuge indoors; but St. Jerome had noticed that as the lion walked he limped as though in pain, and the Saint, who always tried to help those in trouble, waited to see what he could do for the poor animal.

The lion came near, and when he was quite close he held up one paw and looked plaintively at the men.

St. Jerome fearlessly took the paw on his lap, and, on examining it, found a large thorn, which he pulled out, binding up the injured limb. The wound was rather a bad one, but St. Jerome kept the lion with him and nursed him carefully till he was quite well again.

The lion was so grateful, and became so much attached to his kind doctor, that he would not leave him, but stayed on in the monastery. [cite] 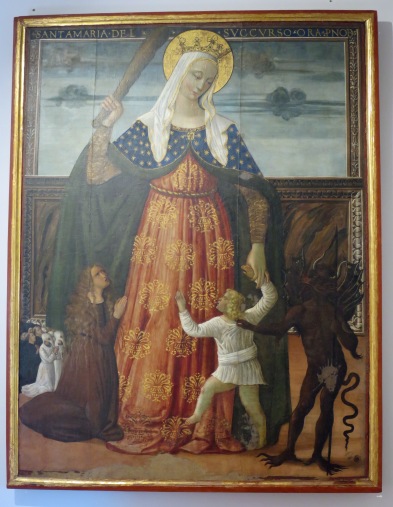 And what was I to make of not one, but two, of “Madonna del Soccorso,” each with the Madonna wielding a club?

The story, common in Umbria though rarely painted elsewhere, concerns a young mother who, tired of her whingeing child, cries, “Would that the Devil might take you away!”, whereupon the Devil appears, prompting the mother to invoke the Virgin to save her infant. [Rough Guide]

More on that tale and plenty others may be found here.

The 14th century “Santa Margherita in carcere” caught my eye as well. In trying to chase that story down, I discovered there are a number of St. Margarets, each with quite the tale to tell. St. Margaret of Corona was a wild child who, after discovering the corpse of her murdered consort, had a change of heart. She’s the most likely suspect for the fresco, as she lived in Umbria and “is the patron saint of the falsely accused, hoboes, homeless, insane, orphaned, mentally ill, midwives, penitents, single mothers, reformed prostitutes, stepchildren, and tramps.” [cite]

Margaret of Clitherow, the only one I spotted who’d been imprisoned, came along too late, and was, anyway likely of the wrong country. Nonetheless, her story deserves note.

She converted to Roman Catholicism in 1574. Although her husband belonged to the Established Church, he was supportive as his brother William was a Roman Catholic priest. He paid her fines for not attending church services. She was first imprisoned in 1577 for failing to attend church. Two more incarcerations at York Castle followed. Her third child, William, was born in prison. [cite]

This Margaret met her end when it was discovered she was harboring Roman Catholic priests:

Although pregnant with her 4th child, she was executed on Lady Day, 1586 (which also happened to be Good Friday that year) in the Toll Booth at Ouse Bridge, by being crushed to death, the standard inducement to force a plea. [cite]

Another candidate, also unlikely, was St. Margaret of Antioch:

Olybrius, Governor of the Roman Diocese of the East, asked to marry her, but with the demand that she renounce Christianity. Upon her refusal, she was cruelly tortured, during which various miraculous incidents occurred. One of these involved being swallowed by Satan in the shape of a dragon, from which she escaped alive when the cross she carried irritated the dragon’s innards. [cite]

An attempt was made to burn her, but the flames, we are told in her Acts, left her unharmed. She was then bound hand and foot and thrown into a cauldron of boiling water, but at her prayer her bonds were broken and she stood up uninjured. Finally the prefect ordered her to be beheaded. [cite]

Gozzoli, Dream of the Palace (center and right)

But enough, now, of miracles and gruesome death. The most astounding sights in the church, which is now incorporated into the Complesso Museale di San Francesco, have to be Benozzo Gozzoli’s frescoes of the life of St. Francis. Vasari wrote of Gozzoli:

This man was a disciple of Fra Giovanni Angelico, by whom he was loved with good reason; and by all who knew him he was held to be a practised master, very rich in invention, and very productive in the painting of animals, perspectives, landscapes, and ornaments. He wrought so many works in his day that he showed that he cared little for other delights; and although, in comparison with many who surpassed him in design, he was not very excellent, yet in this great mass of work he surpassed all the painters of his age, for in such a multitude of pictures he succeeded in making some that were good. [cite] 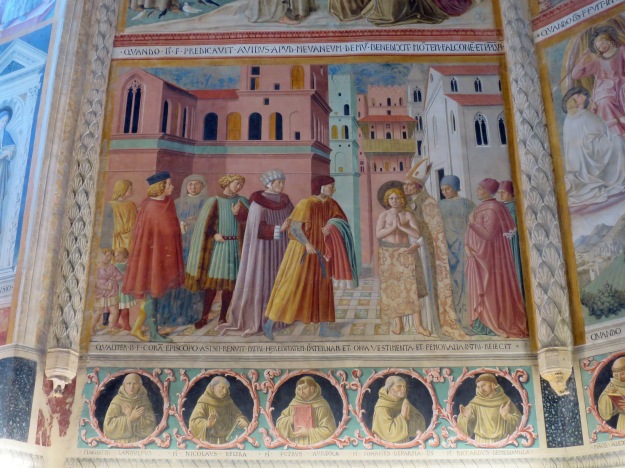 Perhaps the greatest miracle is that the Gozzoli frescoes were there to be seen at all. In 1997,

After the initial earthquake on Sept. 26 rocked the Umbrian hill town of Montefalco in the middle of the night, Luigi Gambacurta, the Mayor and a geography teacher there, awoke and checked to make sure the schools were safe. Then with an engineer he headed for the local museum to check its precious Renaissance frescoes by Perugino and Benozzo Gozzoli.

A few telltale flakes of plaster pointed to a small crack in a rib of the vault above the Benozzos, so Mr. Gambacurta quickly enlisted help to buttress the walls with scaffolding. The job was barely finished when the strong second quake stuck. The frescoes were spared. . . .

Coincidentally, or perhaps providentially, the feast day of St. Francis is also the 500th anniversary of the death of Benozzo Gozzoli, and Montefalco has long been planning a celebration. The Mayor, Mr. Gambacurta, is awaiting approval from the engineers to reopen the museum in time. He is optimistic.

He cannot resist, when a policewoman is out of sight, climbing the precarious scaffolding, about 40 feet high, to show off the fresco in which Benozzo lovingly depicts St. Francis blessing the birds in a bucolic, sun-drenched Umbrian landscape: in the distance, rising above Assisi, is medieval Montefalco, with a bell tower that fell in the 1700’s. Benozzo signed his name beside the scene with an inscription in Latin: ”For what I am as an artist take a look for yourself.” [cite] 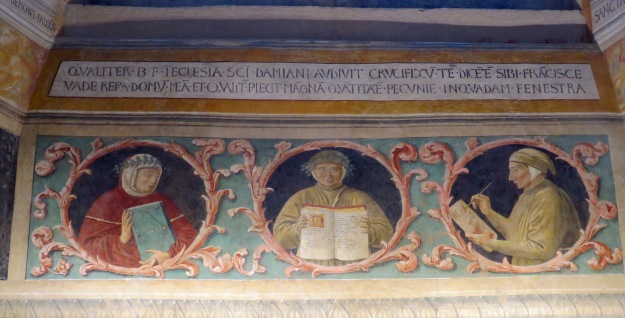 Credits: The sources for quotations may be found at the links in the text. As always on the blog, the photographs, unless otherwise indicated, are mine.

7 thoughts on “When in Umbria: Montefalco”