We continued our survey of Palermo’s art museums with a visit to the Galleria d’Arte Moderna Palermo (GAM). As described by the museum:

[T]he oldest part of the building [is] a sort of prototype for aristocratic residential buildings in the 15th century. Next to it, there was an old Franciscan convent. . . .

During the 19th century, the severe financial crisis of the Franciscan community led to the alteration of some parts of the building into houses for rent. And following the creation of the Regie Scuole Normali and the abolition of the religious orders in 1866, the building was radically changed . . . .

In 2006, after “long and demanding restoration work,” GAM opened its doors on the premises. 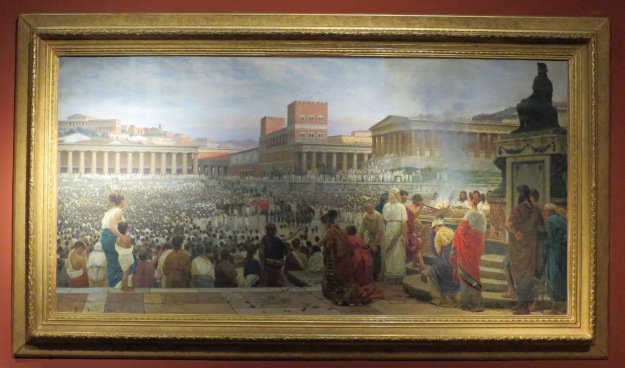 The ground floor’s first rooms are given over to “Art at the great Expositions: the historical genre in large-scale format.” Even absent a descriptor, the theme resonated through the rooms. I funerali di Timoleonte (1874), by Giuseppe Sciuti (1834-1911), offered a case-in-point. The funeral Sciuti depicted took place in Siracusa, and Plutarch told the tale.

. . . the whole ceremony was conducted with great magnificence, and besides, young men selected by lot carried his bier with all its decorations through the precinct where the palace of Dionysius had stood before Timoleon destroyed it. The bier was escorted, too, by many thousands of men and women, whose appearance was one that became a festival, since all were crowned with garlands and wore white raiment; while cries and tears, mingled with benedictions upon the dead, betokened, not a formal tribute of respect, nor a service performed in obedience to public decree, but a just sorrow and a thankfulness arising from genuine good will.

On the other end of the spectrum—from honoring to abuse—stood a Lio Gangeri (1845-1913) sculpture of Fulvia, her arm poised ominously over Cicero’s severed head.

Fulvia took the head into her hands . . . and after abusing it spitefully and spitting upon it, set it on her knees, opened the mouth, and pulled out the tongue, which she pierced with the pins that she used for her hair, at the same time uttering many brutal jests. [citation]

The ground floor’s trajectory moved from grand history through “the portrait between Neoclassicism and Romanticism,” “the long sunset of neoclassical mythology,” and “the celebration of Garibaldi between history and myth,” to arrive at its final destination, the work of “Francesco Lojacono and a new image of Sicily.” [citation]

The paintings of Francesco Lojacono (1838-1915), described in one account as a “Romantic realist,” were full of pastoral charm.

His Mare in risacca (1909), though, made me wonder (without a scrap of knowledge to back it up), whether he’d encountered Impressionism and begun to move in that direction. One suggestive bit of Italian commentary noted he was known as “thief of the sun” and “painter of the sun.”)

The first floor opened with a gallery dedicated to “the realism of Verga in the painting of social protest.” Giovanni Verga (1840-1922) is best known for the short story on which Pietro Mascagni’s opera, Cavalleria Rusticana, is based. His mature work, however, which centered on the impoverished and left-behind, wasn’t popular in the least.

Verga’s portrayal of the impoverished people of Sicily, living in a dusty landscape where nothing had changed in hundreds of years, his sparse, matter-of-fact style in which character is not developed by interior thoughts but revealed through actions and language (that great linguistic experiment, trying to replicate the blunt and proverb-heavy Sicilian syntax of the day) – these things prompted mainly indifference from the reading public and disdain from the critics. Italians of the period wanted to be entertained, not reminded that more than half of the country was very poor, illiterate, and spoke only its local dialects. [citation]

I’d managed to find an English translation of Verga’s novel I Malavoglia (The House by the Medlar Tree). Here’s an apt description of the novel’s premise:

Verga’s major theme in this novel is that hard work and rectitude do not ensure one’s progress or indeed survival in society. Fate, social changes, materialism, capitalistic self-interest, and political pressures play a large part in determining what happens in life: the individual is mostly powerless, isolated, and buffeted to and fro by these outside forces.

It’s an absorbing, atmospheric read, though I guarantee it won’t cheer you up. Here’s a passage that comes close to telling the tale in full:

Whoever goes in search of fortune and does not find it is a fool. Everybody knows that. Don Silvestro, Uncle Crucifix, Padron Cipolla, Master Filippo, were not fools, and everybody did their best to please them, because poor people always stand with their mouths open staring at the rich and fortunate, and work for them like Cousin Mosca’s ass, instead of kicking the cart to pieces and running off to roll on the grass with heels in the air. The druggist was quite right when he said that it was high time to kick the world to pieces and make it over again.

I found the sculpture, La madre dell’ucciso (Mother of the Murdered) (1907), by Francesco Ciusa (1883-1949), one of the gallery’s most affecting works. The original, which received first prize at the 1907 Biennial of Venice, is housed in Cagliari; GAM’s is one of a handful of copies. (A little about Ciusa and this work may be found here.)

Una famiglia povera (1866), by Pietro Volpes (1827-1924) struck me for a reason far from profound: the scale of the human beings depicted as compared to the tiny cat.

The first floor galleries advanced through the 19th and into the early 20th centuries. With useful plaques as guides, each gallery gave way to another full of art and artists about which I knew nothing.

Not only was Antonino Leto (1844-1913) new to me, but also the currents of artistic work with which he was associated, including the Scuola di Resina and the Macchiaioli movement. (He also met, and surely had to have been affected by, the French Impressionists.) Giuseppe De Nittis (1846-1884) has been described as the nucleus around which the School of Resina formed. The way he wrote of his experience might have been lifted straight out of La Bohème:

So every morning before dawn, I left the house and ran to look for my fellow painters, much older than me, Rossano and Marco De Gregorio. We started all together. I had no money and they were far from being rich, but they managed to rustle up a little money here and there, my meals were irregular and very frugal. But, I was used to this simple way of life. How many times have I just eaten bell peppers and salad! Good old days! With so much freedom, so much fresh air, so many races without end! And the sea, the vast sky and the vast horizons! Away the islands of Ischia and Procida; Sorrento and Castellammare in a rosy mist that gradually was dissolved by the sun … Sometimes, happy, standing under the sudden downpours. Because, believe me I feel the atmosphere, I know it; and I painted it many times. I know all the secrets of air and sky in their intimate nature. 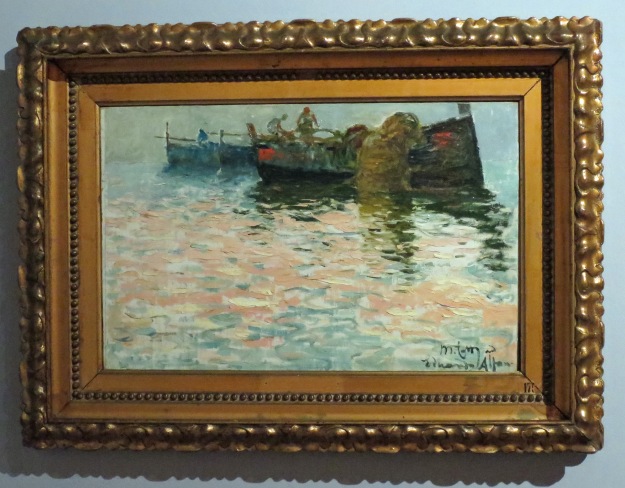 Sweetly atmospheric scenes by other artists yielded to the sparse, rough strokes of Michele Catti (1855-1914) in his Riflessi (1905-10). These in turn yielded to his depictions of Palermo, which put to mind Camille Pissarro’s painting of the effect of rain on Parisian streets.

Catti’s development as a painter is intriguing, if the rough translation available is any guide. Frustrated by his parents’ ambitions for him to become a lawyer, he ran away from home. He came under the wing of novelist Luigi Natoli, who introduced him to the artistic circles of Palermo. Then, “after a brief apprenticeship with the painter Francesco Lo Jacono,” Catti seems to have become bored with the “monotonous exercise and the meticulous copy, almost photographic, the reality to which he was obliged” and moved on, a pattern that seemed to repeat as he sought his own artistic path. (The only sources I found on him are in Italian. Here and here are two. )

The second floor galleries moved further into the 20th century, with divergent paths artists followed on vivid display. Gino Severini (1883-1966), a prominent Italian Futurist, became part of the artistic “return to order” after World War I. I suppose his Ritratto (1932-34), as elegant as it is plain, must be from that phase. (More on Severini may be found here.)

Felice Casorati (1883-1963), also associated with the post-World War I “return to order” pursued an entirely different approach. The students in his Gli scolari (1927-28) are not so much individual beings but solemn archetypes. (More on Casorati may be found here.) Casorati wrote, in 1931:

In taking up, against me, the old polemic of classicism and romanticism, people rail against intellectualized and scholastic order, accuse my art of being insincere, and wilfully academic—in a word, of being neoclassical. . . . since my art is born, so to speak, from within, and never has its source in changing ‘impressions’, it is quite natural that . . . static forms, and not the fluid images of passion, should be reflected in my works.

Renato Guttuso (1911-1987), who painted an oft-referenced scene of the Mercato Vucciria, claimed two-thirds of a room. Two portraits of Guttuso, one a bust by Nino Franchina (1912-1987), the other a self-portrait, offered sharp contrast with Testa (head) (1937), an ominous, round-faced bust by Emilio Greco (1913-1995). I’ll take Guttuso over the Greco bust, plebe that I am. But perhaps there’s not so much artistic sin in that as I suppose:

Guttuso’s appetite for reality is, well, real. He has a true relish for the things of this world. It is no surprise that he illustrated Elizabeth David’s book Italian Food, for some of the loveliest things here are his pictures of watermelons and coffee pots and corn cobs in the sun. . . .

These paintings remind you that Guttuso painted at the time when Caravaggio was being rediscovered. Caravaggio’s fruit dishes are resurrected in his haunting 1940 painting Still Life With Fruit. He also plainly has a lot in common with neo-realist film-makers like Rossellini and Visconti for, after the fantasy culture of fascism was defeated, Italy craved the solid, the tangible: the real. [citation]

I left GAM with an appetite, too, though of a different sort. I wanted to know what came next in Italian, and particularly Sicilian, art. Another of Palermo’s art museums beckoned, though I’d not get there until the last day of our trip.

Program notes may be found here.

Credits: The sources for quotations may be found at the links in the text. As always on the blog, the photographs, unless otherwise indicated, are mine.