Usually something grabs my attention, something intrigues me, and I don’t really know what it is. The sketch or the painting is an inquiry into that.
—Robert Berlind

I write here to make a brief record of “things seen” in the past week. There was far too much to take on board in the time allowed, but at least I got a glimpse, as most of these exhibits have closed or will close before I have another chance to view them. My attempt to capture what I saw in photographs falls far short of what I saw “live,” but I’ll post a small selection in hopes of giving an idea, as well as including several links. 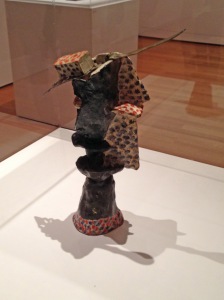 The sculptures offered a wholly different vantage point from which to think about Picasso’s work and process. One vitrine contained nothing but pebbles and fragments of ceramic and bone on which Picasso had engraved faces and heads; the works on one wall included three pieces of torn paper, one burnt, one scratched, and one merely torn, fancifully called “Head of a Dog,” “Death’s Head,” and “Goat.” I found it easy to imagine Picasso out scavenging, discovering objects and materials to create sculptures ranging from miniature to monumental. As the MOMA brochure noted, since Picasso was trained as a painter, not a sculptor, “this facilitated a natural disregard for tradition in his sculptural work.” In addition to typical media—plaster, clay, bronze—Picasso used lumber, cardboard, sheet metal, wire, sand, paint, “and a host of everyday objects, including absinthe spoons, cake molds, pebbles, spigots, and palm fronds.”

Facebook has its uses, and one was alerting me to MOMA’s exhibit of Torres-García’s work. I knew nothing of this artist, and had a friend not noted the exhibit, I would have missed it entirely. MOMA’s website notes:

Torres-García is one of the most complex and important artists of the first half of the 20th century, and his work opened up transformational paths for modern art on both sides of the Atlantic. His personal involvement with a significant number of early avant-garde movements—from Catalan Noucentismo to Cubism, Ultraism-Vibrationism, and Neo-Plasticism—makes him an unparalleled figure whose work is ripe for a fresh critical reappraisal in the U.S.

An excellent catalogue of his works, as well as other information, may be found here.

Two exhibits I saw last week continued development of a web of connections among the work of artists to which I’ve previously been drawn, notably that of Lois Dodd (1927-   ) and Neil Welliver (1929-2005).

Over a fifty-year career Berlind produced an expansive and refined body of work that was rooted in landscape, reflecting a scholar’s knowledge of the history of art, and a contemporary artist’s relentless effort to understand how we perceive and integrate the visible and interior worlds. This effort was almost entirely camouflaged by the deceptive simplicity of his work, and yet it could be sensed in the considered organization of forms, and in the tensions he created across the surfaces and within the layers of his paintings.

The movement of Berlind’s vision reminded me of the gestures of a Tai Chi practitioner, gradually encompassing all dimensions of space (and time). We sense the scanning and tracking motion of his eyes as he sought and isolated particular fragments of the landscape.

The gallery has provided a flipbook to view here. There is another informative interview with Berlind here.

I was alerted to this exhibit by visual artist Sarah Faraguer,  who posted, in a series of “Paintings I Love,” a Fish work of honey jars. In the gallery, the first painting that came into my view was a large-scale canvas depicting three jars of mustard pickles, which I found mesmerizing. The effect of seeing this and other paintings in the exhibit is captured nicely here:

. . . by the time you are standing at an optimal distance from any one canvas, the scale has swollen to a size that has no relation to the actual object. Jelly jars climb to a yard high, rendering their orange glow back into the reality of paint on canvas. The displacement of scale compels a viewer to accept both the illusion and the painted surface in a balance that is far more absorbing than orthodox photorealism, which strives to defeat the painterly aspect. Fish keeps our attention on both illusion and surface by maintaining a field of direct, near ascetic strokes in all of the manifestations of her style.

The selections are a miscellany, the only common thread for which is that they’re works I’ve listened to in recent days.

On Spotify (complete works listed below)

Luigi Dallapiccola, Partita for Orchestra (1930-32) (Part IV)  (The entire work may be heard (in three segments) here,  here, and here.

I also want to call attention to composer Gregory Mertl (1969- ), a Hungarian composer new to me, whose captivating, accomplished trio, Quatre états d’âme (2016) for clarinet, cello and piano, received its world premiere at a terrific concert by the ensemble counter)induction, which commissioned the work. The work is not yet available online; I hope it will become available soon. In the interim, others of his works are available for listening here. A Spell of Myriad Dances or Contemplative, from Evocations of an Earthly Nature, might make an interesting starting point.

The photographs are mine. The sources for quotations used in the text may be found at the indicated links.

15 thoughts on “Art Abounding, with Music”