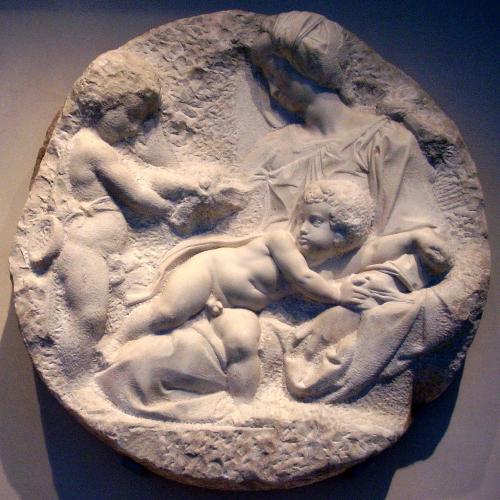 The Taddei Tondo by Michelangelo

Some kind of spring has broken in my brain. I have not written a note since the Fifteenth Symphony. That is a terrible state of affairs for me.

March, 1975, marked the 500th anniversary of Michelangelo’s birth, and Shostakovich noted it as a motivation for the Suite. [Laurel Fay, Shostakovich: A Life Loc 4095]  It’s possible, too, that the seeds were planted much earlier, when Benjamin Britten and Peter Pears performed Britten’s Seven Sonnets of Michelangelo as part of a concert at the Moscow Conservatoire in 1966. Shostakovich wrote Glikman at the time, “The whole concert gave me the greatest pleasure.” [Glikman 136]

Shostakovich chose the poems to set while “leafing through” a book about Michelangelo he’d recently received  “and looking at the reproductions of Michelangelo’s great creations.” [Glikman 196] He listed for Glikman the poems he chose and wrote,

I find it hard to make any judgment about Michelangelo, but it does appear to me that the essence has come through. And by the essence of these sonnets, I had in mind: Wisdom, Love, Creation, Death, Immortality. The translations by Abram Efros are not always successful, however the immense creative power of Michelangelo shines through even an inadequate translation. [Glikman 197]

Michelangelo didn’t give names to his poems, but Shostakovich supplied titles for his settings. One commentator described the eleven settings as “loosely group[ed] into larger sections,” including “a prologue (Truth),” three related to love (Morning, Love, and Separation), three “dramatic statements” (Wrath, Dante, and To the Exile), and four “more interior” settings (Creativity, Night, Death, and “Immortality as a kind of epilogue”).  Another commentator grouped the settings “into four categories with different moods:”

The first ‘movement’ consists of the declaratory Truth and the lucidly lyrical Morning, Love and Separation; the second movement consists of the dramatic Wrath, Dante and To the Exile. The third movement features the pain of living and the yearning for oblivion in Creativity and Night, leading to the finale, Death, and a noble epilogue, Immortality . . . [Marianna Kankare-Loikkanen]

Francis Maes described the settings yet differently. While he identifies the same trio of settings “devoted to love,” he describes two of the songs (Creativity and Night) as “speak[ing] directly about [Michelangelo’s] work as a sculptor,” the next three (Dante, To the Exile, and Creativity) as meditating “on the value of creativity,” and the last three (Night, Death, and Immortality) as “deal[ing] with death.” [Francis Maes, “Between reality and transcendence: Shostakovich’s songs,” The Cambridge Companion to Shostakovich Loc 5432-5443]

It’s easy, and perhaps not wholly inappropriate, to be tempted into mining the poems Shostakovich chose for clues about his own life and state of mind—yet the differences among the commentators, even in identifying groupings, suggest a need for caution. As one example, the poem Truth (Sonnet 6) provides a nearly irresistible provocation toward biographical interpretation. Here are its opening lines (in James Saslow’s translation):

My lord, if any ancient proverb is true,
it’s surely this one, that one who can never wants to.
You have believed fantastic stories and talk
and rewarded one who is truth’s enemy.

Saslow described Truth as “an angry denunciation of the ingratitude of some important patron . . . most likely . . . Pope Julius II. [James M. Saslow, The Poetry of Michelangelo: An Annotated Translation] It takes a good deal of mental fortitude not to draw a direct line from Michelangelo’s suffering under Pope Julius II to Shostakovich’s under Joseph Stalin.

Even more irresistible is the temptation to draw a parallel from Michelangelo’s poem about Dante, To the Exile (Sonnet 250), to the fate of Aleksandr Solzhenitsyn and his supporters, including Shostakovich’s close friends Mstislav Rostropovich and his wife ‎Galina Vishnevskaya. It’s hard to imagine that the poem failed to resonate with Shostakovich on these grounds. After all, the poetry—and the music—we hold most dear is often that which helps us make meaning from, or at least resonates with, our own circumstances.

The important thing is to remember that meanings are multiple—and they might conflict just as often as they are consonant. Francis Maes cautioned of a “tendency, especially in the West,”

To approach songs mainly with a desire for unequivocal answers to vexing questions of meaning in Shostakovich’s music as a whole, based on the tacit belief that words should provide a stable conceptual framework that is lacking in instrumental music. [Maes Loc 5022]

Yet the temptation must be avoided, for the settings are richer than any single biographical strand can suggest. Maes observed,

Can it really be that Shostakovich . . . turned to Michelangelo’s poetry only because he could thereby project his experiences with Stalinism onto the relationship of the Florentine sculptor with Pope Julius II? Such an approach not only denies the multi-layered meanings in the texts and music’s capacity to enrich their content, it even tends to regard only selected sentences from the poems as significant for the meaning of the songs. [Maes Loc 5047]

Better, perhaps, simply to listen—for the settings are exquisite—and let associations arise as they will.

The opening trumpet call of Truth summons me back to Michelangelo’s time and to sculptures of his I saw in Florence. I think, too, about Shostakovich leafing through the book, contemplating what he saw, choosing among the poems, and imagining how he’d set them. I travel forward in time, too, on an imagined trip to Rome.

At other times, I hardly require the poem’s words, let alone any associative trail of thoughts. I need only to listen as wind instruments spiral through Love (Sonnet 42) to understand the sonnet’s plaintive question (“whether my eyes/really see the beauty that I long for,/or if it’s just in me”) and Love’s response.

The percussive blasts in Creativity (Sonnet 46) remind me that Shostakovich “had read that Michelangelo possessed such power and precision that with his very first blow he could hew out of a boulder all the superfluous marble.” [Elizabeth Wilson, Shostakovich: A Life Remembered 513-14]  At the same time, I think of a gorgeous meditation on creativity, Sculpting an Angel, that Mark Kerstetter recently noted, which begins:

I’m working the poem the way that
Michelangelo found David in
quarried stone. Deciding which is
pure dream and what is only marble.

From Creativity, the settings move through Night (Epigram 47 and related quotation) and Death (Sonnet 295), the latter with its reprise of the trumpet calls that opened Truth. The Suite could well have stopped here, the reprise of trumpet calls offering a signal that the music—and life—were about to end.

Yet there is one more setting, Immortality. For this setting, Shostakovich chose two epitaphs (190 and 194) from a set of forty-eight [Saslow 3] that Michelangelo wrote to commemorate the death of the 16-year-old nephew of his agent, Luigi del Riccio. Del Riccio had asked for a portrait, but Michelangelo didn’t like portraiture and offered the epitaphs, a sonnet, and a madrigal instead. [Saslow 20] Del Riccio seems to have showered Michelangelo with gifts to entice him, prompting Michelangelo to accompany some of the epitaphs with wry comments. To Epitaph 190, Michelangelo appended the note, “When you don’t want any more of these, don’t send me anything further.” [Saslow 350] He accompanied Epitaph 194 with the note, “I didn’t want to send this one to you since it’s very clumsy; but the trout and the truffles would compel heaven.” [Saslow 356]

It’s hard not to laugh, despite recognizing the solemn occasion that caused the writing of the epitaphs. It’s even harder not to laugh when listening to the mad-cap toyshop tune that opens Shostakovich’s setting, taken from a piano piece he wrote when he was nine. The setting increases in gravitas as it proceeds, but an echo of the toyshop tune sneaks in again at the setting’s close.

. . . descriptions of the first movement as a toyshop, a picture of a childhood with unclouded skies, or as a protest against death all serve more to confuse than clarify. In fact there is as much of the enfant terrible as the innocent child in the music . . .”. [Wilson 493]

Much the same might be said of Shostakovich’s musical vision of Immortality.

Is there an end, then? Or do the possible meanings and associations endlessly open out? As Epitaph 194 would have it, “I’m not really dead; though I’ve changed homes,/I live on in you . . .”. [Saslow 356, Epitaph 194] I’m partial to the Pasternakian quality of that formulation, though I suspect it lacks a needed dash of mordant wit.

Maes observed of Shostakovich’s “large vocal cycles” that “Shostakovich moves beyond the closure arrived at in the penultimate song by means of a contrasting or ironic final song.” [Maes 5495-5501]

The tension between reality and transcendence runs through most of his song output. In the late cycles, the quest for transcendent values became especially pronounced. The higher the hopes set on the redeeming quality of art, the more violent the backlash of scepticism . . . . His world-view remained a sceptical one to the end. [Maes 5535]

Well, I don’t know. That sounds a bit like one of those “unequivocal answers to vexing questions of meaning” Maes himself had cautioned against. Perhaps it’s all of the above. Or perhaps Shostakovich was simply reveling in a burst of creativity after a dry spell and, as one great artist to another, responding to Michelangelo’s words in the language of music—the language he knew and loved best.

Dmitri Shostakovich, Suite on Verses of Michelangelo Buonarroti, op. 145a (1975)

Credits: The image at the head of the post may be found here. The quotations may be found at the sources indicated in the post. The page number (or Kindle location number) is given where available.

4 thoughts on “Seeking Shostakovich . . . in the Verses of Michelangelo”