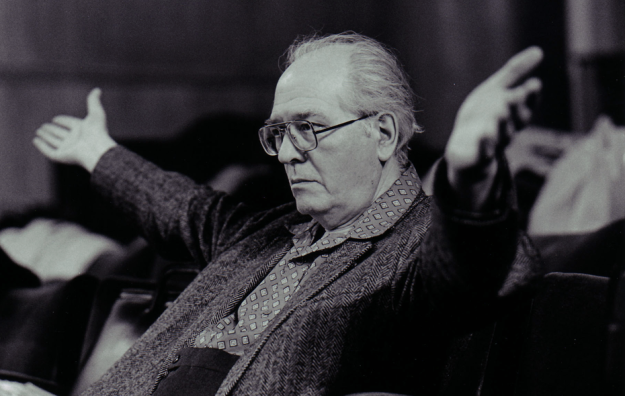 The final assignment for the music course was to write a program note 800-1500 words in length, meeting detailed specifications and chosen from one of the following: Mendelssohn Quintet No. 2, Messiaen Turangalîla-Symphonie, Rachmaninoff Moments musicaux, Op. 16, Schubert Quartet No. 9 in G minor, D. 173, or Stravinsky Three Movements from Petrushka. I have a keen appreciation for what it takes to write a good program note, and this was definitely an instance of a fool rushing in where angels fear to tread . . .

Era: Olivier Messiaen composed the Turangalîla-Symphonie from 1946 through 1948, primarily at his summer home in Petichet, France. Serge Koussevitzky, conductor of the Boston Symphony Orchestra and a significant supporter of new music, commissioned the work. This didn’t mean that audiences were eager to embrace new music, though, and market forces were leery, to say the least. Leopold Stokowski, another great supporter of new music, lost his job with NBC by insisting on a premiere of Schoenberg’s 12-tone Piano Concerto in 1944.

Post World War II was a turbulent time for classical music. If it ever existed, the linear narrative of music from Bach through Brahms had broken down. In 1949, the year Leonard Bernstein, age thirty, conducted the premiere of Messiaen’s Turangalîla-Symphonie in Boston, Richard Strauss died, the school for new music in Darmstadt, Germany, celebrated Schoenberg’s 75th birthday with performances of his works, and Theodor Adorno’s Philosophy of New Music appeared, in which he wrote that new music had “taken upon itself all the darkness and guilt of the world.”

While Messiaen incorporated both atonality and 12-tone (serialist) elements in his work, his polyglot musical language was out of step with those in the musical avant-garde who hewed closely to serialism as the one true way. Yet, while many in the classical music audience did not embrace serialism, audiences were also not particularly receptive to Messiaen’s work.

Composer biography: Messiaen (1908-1992) was born and lived in France. He entered the Paris Conservatoire in 1919, where his teachers included Jean Gallon (harmony), Paul Dukas (composition/orchestration), and Marcel Dupré (organ/improvisation). Gallon put the score of Claude Debussy’s Pelléas et Mélisande into Messiaen’s hands when he was a boy. Messiaen called the score a “veritable bomb in the hands of a mere child. . . .That was probably the most decisive influence I’ve received.”

Messiaen was interned in a stalag during World War II, where, under appalling conditions, he wrote his masterwork, Quatuor pour la fin du temps. Upon release in 1941, he began teaching at the Paris Conservatoire, attaining the position of Professor of Composition in 1966. Messiaen also served as organist of La Sainte Trinité in Paris from 1931, where he played organ on Sundays until his death.

Messiaen was mentor to many, even those who scorned his harmonic ideas, including post World War II avant-garde composers such as Karlheinz Stockhausen, Iannis Xenakis, and Pierre Boulez. As Schoenberg had in 1922, Messiaen, in 1944, wrote an influential treatise on music. Alex Ross has observed that Messiaen’s treatise might be seen as a direct refutation of Schoenberg’s. The musical temperament of these composers may be close to polar opposites, too, with Schoenberg’s serialist music, to borrow a phrase from Wallace Stevens, evincing a “rage for order,” while Messiaen’s music expressed an unending, ecstatic ode to joy.

Background of the piece: After Messiaen’s release from the stalag, he confronted the increasingly debilitating mental illness of his wife, Claire Delbos. Among his first students at the Conservatoire was Yvonne Loriod, a brilliant pianist who was his inspiration for the Turangalîla-Symphonie and became his second wife after Delbos’ death. It was in this context that, in 1945, Koussevitsky commissioned the work.

The Turangalîla-Symphonie is part of a trilogy inspired by the Tristan and Isolde legend. (The other two works are Harawi, a song-cycle, and Cinq Rechants, for twelve unaccompanied voices.) It was Messiaen’s first large orchestral piece and notable for inclusion of prominent solo parts for piano and ondes Martenot, an early electronic instrument known for its otherworldly sound. Later orchestral works that expanded on the Turangalîla-Symphonie’s ground included Et exspecto resurrectionem mortuorum and Des canyons aux étoiles…., each of which was large-scale and inventively orchestrated, with a soundscape wholly Messiaen’s own.

The premiere of the Turangalîla-Symphonie received mostly negative reviews. Virgil Thomson, who had previously praised Messiaen’s music, complained that it came “straight from the Hollywood cornfields.” Rudolph Elie, at the Boston Herald, waxed fulsomely on the work’s deficiencies:

The clue to the possible fundamental emptiness of this work, is the appalling melodic tawdriness of the three big cyclical themes heard throughout. […] The first is a motto of six notes Gershwin would have thought better of; the second might make the grade as a tune for Dorothy Lamour in a sarong, and the third, a dance of joy, might be ascribed to Hindu Hillbillies, if there be such.

Koussevitsky had a different view, proclaiming the Turangalîla-Symphonie “the greatest composition composed in our century” after Stravinsky’s The Right of Spring. If performances and recordings are any indicator, Koussevitsky’s judgment came closest to the mark: the Turangalîla-Symphonie has been recorded and performed many times since its premiere and continues to be performed and recorded today.

A closer listen: While Messaien took his idea for the Turangalîla-Symphonie from the Tristan and Isolde legend, his focus was not on a musical retelling, but on its essential idea as “a love that is fatal, irresistible and which, as a rule, leads to death; a love which, to some extent, invokes death, for it transcends the body—even the limits of the mind—and extends on a cosmic scale.” The title of the symphony itself suggests the interwining of love and death, combining two Sanskrit words, “turanga” (“the passage of time, movement, and rhythm”) and “lîla” (“the play of creation, destruction, life and death, also love”).

While a symphony in name, the Turangalîla-Symphonie bears little relation to a traditional symphony. Rather than proceeding on the basis of a conventional symphonic narrative, the symphony communicates in a manner akin to poetic parataxis, its ten movements creating, by juxtaposition and association, an enthralling musical world.

I. Introduction: After a frenetic opening, the first (“statue”) theme sounds on trombones and tuba, punctuated by swooping notes on ondes Martenot. The second (“flower”) theme, comprised of gentle notes on a pair of clarinets, provides the first of many contrasting juxtapositions in the piece. After a virtuosic turn on piano, a calculated cacophony of sound takes over, with the “statue” theme reintroduced near the movement’s close.

II. Chant d’amour 1: The movement begins in strident dissonance before breaking out into contrasting passages of ebullience and lyricism. Dissonance stalks lyricism throughout; hopes of resolution are set up repeatedly only to be dashed.

III. Turangalîla 1: The movement juxtaposes plaintive notes on winds and ondes Martenot with sonorous passages on trombones and in the orchestra’s lower register. The disparate soundscapes twine together, interspersed with percussive clucking as the movement progresses.

IV. Chant d’amour 2: A syncopated dance advances and retreats, giving way to a spiraling of sounds incorporating fragments of the “statue” and “flower” themes. A piano cadenza drifts off on gentle notes and chords.

V. Joie du sang des étoiles (Joy of the blood of the stars): An exuberant bacchanal supplants the fourth movement’s quiet close, with a piano cadenza hurtling toward a triumphant restatement of the “statue” theme as the movement ends.

VI. Jardin du sommeil d’amour (“Garden of love’s sleep”): In another dramatic shift, the sixth movement offers a return to tranquility. Accompanied by evocation of bird song from the piano, the movement realizes the “love” theme’s full lyricism.

VII. Turangalîla 2: The dissonant, percussive seventh movement evokes sheer terror. Messiaen, who had in mind Edgar Allen Poe’s The Pit and the Pendulum, magnifies the terror of Poe’s fiction exponentially in sound.

VIII. Développement de l’amour: The movement’s belated “development” of the cyclic “statue,” “flower,” and “love” themes is as fractured as it is dense. Messiaen also introduces a fourth cyclic theme he described as “a simple chain of chords.” Buoyant joy and threatening darkness are bound inextricably, in music as in life.

IX. Turangalîla 3: The third of the Turangalîlas employs a traditional symphonic movement structure, theme and variations. Through inventive orchestration and use of percussion, Messiaen creates a modern soundscape that is elegant and strange at once.

X. Finale: The tenth is the only movement that uses sonata form, with its clear and unequivocal beginning, middle, and end, closing on an extended, resounding tonic chord. It is as if Messaien, after the wild sonic ride that is the Turangalîla-Symphonie, wanted to double the joy of arrival at its ecstatic close. 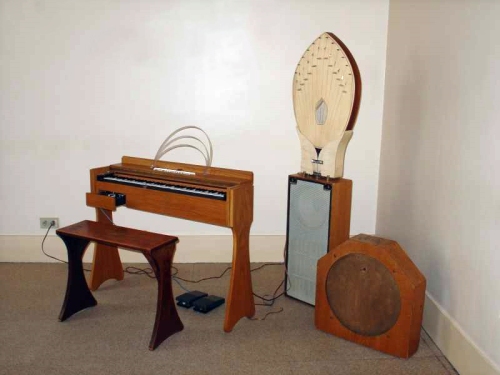 For a Spotify listening list, click here. The Spotify list includes a recording of the Turangalîla-Symphonie in which Yvonne Loriod is the pianist and her sister, Jeanne Loriod, plays the ondes Martenot. The list also includes the other pieces in the Trilogy, Harawi and Cinq Rechants, and, as “bonus tracks,” Vingt Regards sur l’enfant Jésus, for piano, which I find particularly beautiful and hope you might, too.

Philharmonia Orchestra: Program Notes and YouTube Video about the premiere

Ross, Alex, The Rest is Noise: Listening to the Twentieth Century

Stevens, Wallace, The Idea of Order at Key West

The following books and articles, though limited to a few excerpts retrievable online:

Griffiths, Paul, Olivier Messiaen and the Music of Time