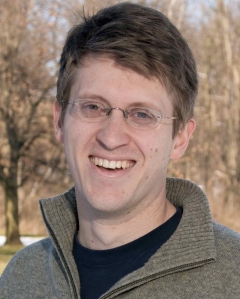 I met Lembit Beecher’s mother first. On the subway, I spotted a woman I’d met at a concert I’d just attended and asked what she thought. She pointed to the fellow standing in front of her and said, “He’s the one to ask.” And that’s how I met Lembit Beecher.

When I got home, I looked up Beecher and discovered his documentary oratorio And Then I Remember. I couldn’t believe my luck: with his grandmother’s voice and stories at its compelling core, Beecher’s oratorio evokes the terror and resilience of the Estonian twentieth century with spellbinding grace.

I reached out to Beecher with some questions about his composing life, and here’s what he wrote back:

Q: Tell us about an early musical memory that resonates for you today.

When I was around 8 or 9 I remember telling my piano teacher that I only wanted to play pieces in minor keys. I even remember being upset when she assigned a little A-minor Chopin waltz because it modulated to C Major fairly quickly! I’m not sure why I remember this so clearly, but I remember at that age being captivated by the yearning power of minor keys, and I think the desire to capture that feeling was one of the first reasons I started writing music.

Q: You grew up among the storied redwoods of northern California, “a few miles from the wild Pacific,” and you’ve noted the impact of that landscape on your work. In writing about Still (the second movement of Frantic Gnarly Still), you note that “Nighttime beaches are a place for me to clear my mind. Everything is space and nothing is concrete.” Can you talk a little about how that nighttime beach informed your compositional choices and instrumentation for Still?

I went to the beach several times at night as I was starting to write this movement and I remember how good it felt just to sit and listen. (It’s amazing how many ways there are to listen!) The darkness and regular irregularity of the waves felt freeing and relaxing. My goal writing this movement was to put myself in this listening mindset and I think the result is music that is very still, even though it is not always very quiet. I normally think a lot about propulsion in my music but this movement is much more about sound and writing it. I found myself focused on enjoying the timbres of these very different instruments and letting the music emerge, rather than worrying about form or developing material in a conscious manner. The instrumental choices were actually already determined for me since I was pretty much limited to what I had used in the first movement!

Q: Can you name one (or more) composer’s music to which you are particularly drawn, and say a little about why? Can you point to a specific composition that you believe to be a good exemplar of what draws you to the composer’s music?

I tend to get really into individual pieces rather than the total output of a composer. I think my favorite pieces of all time are the Bach Cantatas—their sheer beauty, emotional range, conciseness, combination of expression and counterpoint, and instrumental/timbral play are hard to beat. And I just get a feeling of absolute joy when I listen to them. In general with Bach I love the balance he achieves between different musical elements/impulses. Other pieces that I have been really moved and excited by recently are Berg’s Lyric Suite, John Adams’s El Niño and Chamber Symphony, Feldman’s The Viola in My Life, Kurtág’s Kafka Fragments and various choral pieces by Veljo Tormis.

Q: You note that you are “also interested in memory and the various ways we tell stories.” (And Then I Remember is certainly a stellar example of that.) I was particularly taken by what you wrote about Song in Mistranslation. In that case, you took down a quick transcription of an Estonian song, “Käte käskimine (Bidding Hands to do Work) in a southeastern dialect of Estonian called Setu,” which you then set aside. “Many years later,” you wrote,“ I thought of that song . . . . Without looking at the transcription I began writing. What emerged was music clearly but distantly infuenced by the Setu song. . . . But I also realize that the music I wrote would not be identified by a Setu singer as having anything to do with her music. This sense of a cultural one-way street is something that I think immigrant families such as mine often face.” Can you talk about that one-way street a bit and say something about the way in which it might inform your music?

My mother is Estonian and though I grew up in California, Estonian was my first language. This has led me to think a lot about immigrant families. I’m particularly interested in the way culture and sense of cultural identity get passed down and filtered through generations, sometimes weakening, sometimes strengthening and sometimes just changing in unexpected ways. As a result, I think many immigrant families keep identifying strongly with their place of origin after several generations, even though they would be treated as foreigners if they were to return.

Q: You are a conductor and pianist as well as a composer. What is the musical journey that led you to composing, and can you tell us something about the synergies among those three roles?

I took a rather circuitous route to composing. I played piano throughout my childhood, dabbled in other instruments as I got older, and studied biology for a little while in college before beginning to write seriously in my third year at Harvard. I had started writing a little bit in high school, improvising at the piano and then writing little pieces for my friends, but it was not until college that I realized how important creating music was to me. I conducted quite a lot in college and still love the physical relationship to music that conducting provides, but I don’t love studying scores enough to be a good conductor! I think it is very important for my writing to keep performing music, whether it is playing piano, conducting or trying to learn new instruments. I do not want to become divorced from the physical creation of sounds.

Q: And Then I Remember is an enormously powerful work. Your musical sensitivity to your grandmother’s storytelling is extraordinary. It would have been all too easy to crowd the story out with overpowering musical gestures, and you completely avoid falling into that trap. At some points, as you wrote, did you find yourself overwhelmed by the force of your grandmother’s story? (I think particularly of the segment March, 1940, in this regard.) Give us an example of how you used your creative tool kit to cope with the enormity of the material and locate the right musical avenue to take.

Thanks for your kind words about the piece! Writing And Then I Remember, I spent a lot of time thinking about the different ways of presenting parts of the story. There were times when the weight and emotions of my grandmother’s story made it difficult imagine music, but luckily she was such a fine storyteller with such a musical voice, that it was easy to let her voice carry the story. I wanted to allow the music to emphasize and deepen the emotional sense of the stories but I needed to be careful not to make the stories sound overly sentimental, so my approach had to be flexible. For example, my grandmother’s story describing a visit from her future husband that opens Mvt. II moves gradually from recorded audio of my grandmother’s voice into a soprano and double bass duet, like a memory becoming more vivid. But I did not feel I could set my grandmother’s story about the initial Soviet invasion (the second half of Mvt. II) to music without making it seem overly dramatic so I just used my grandmother’s voice with a very sparse accompaniment. Since this seemed like such a biting emotional moment, I followed the story with an instrumental movement (Mvt. III), that reflected the feelings of the story in a more abstract way.

(A video of a performance of the complete oratorio can be found at the end of the post.)

Beecher recently finished a string quartet that will be premiered by the Del Sol Quartet on December 7th in San Francisco. In the spring he’ll be writing a wind quintet for the Quintet of the Americas, inspired by interviews with senior citizens in Queens, but the bulk of his work this year will be related to the residency he has with the Opera Company of Philadelphia, Gotham Chamber Opera and Music-Theatre Group. Right now Beecher is working on a 25-minute piece for Gotham Chamber Opera.

Beecher was born of Estonian and American parents and grew up on the west coast, “under the redwoods in Santa Cruz, California.” He’s also lived in Boston, Houston, Ann Arbor, Berlin, and New York, receiving degrees from Harvard, Rice, and the University of Michigan.

Beecher’s work has been performed in many venues, including the Tanglewood, Aspen, and Cabrillo Music Festivals. Among other honors and awards, in 2011, he was appointed as the first Composer In Residence of the Opera Company of Philadelphia.

And Then I Remember (Part I)

And Then I Remember (Part II)